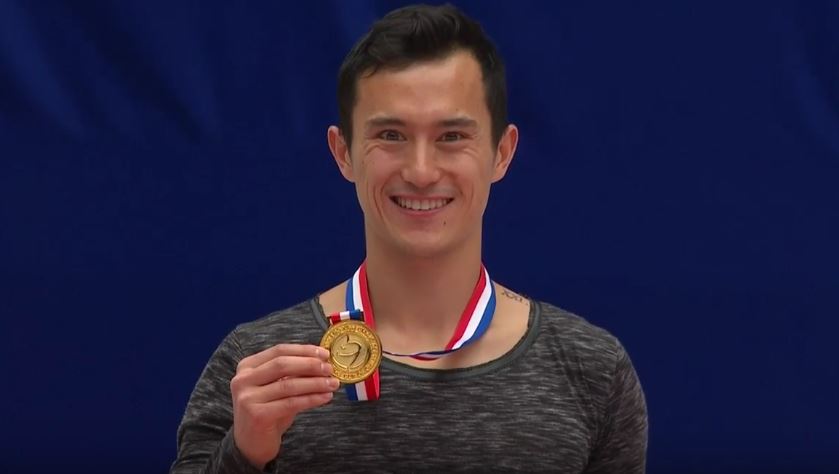 After placing third in the short program, Patrick won! He’s going to the Grand Prix Final!! Such a lovely free program that impressed commentators and spectators alike! What great news for me to wake up to! I am bleary-eyed but satisfied as I update this post! Below is one of my favorite moments captured in slow motion – see how calm and composed Patrick looks!

Cute moment: When the winners were each given a model Audi car! Patrick was very composed and calm during the Canadian anthem – I love his smile afterward!

After receiving his scores for the win, Patrick’s coach Marina Zoueva whispered in his ear and he laughed and said, “It is actually one point, OMG.”

What was your favorite part of Patrick’s performances? Leave a comment below!


I told myself to relax and not try and rush through the program. Even the fall during the quad Salchow I made sure I didn’t panic and just continued to do the program as I did at home and forget about the mistake.


I told myself to not think about the podium… My training going forward will be more balanced. I would like to focus on the combination of the various elements to show the quality of movements completed. I will continue to challenge my limits and look forward to skating with a higher level of technique and expression. (Translated)


One thing I’ve learned since coming back to the competitive scene is that I really need to let go of the fact that I’m doing this for the results. It is not easy to forget about results, but that was my approach today.

I’m so happy that Patrick is now focused on the process and not on the results of his performances! I always believed that if he focused on the moment by moment work that he had to do and did it the same way he did at home, he would be able to handle the pressure much better and skate well. One way to tell how calm he was before his free skate was this moment that was captured right after his name was announced. He spotted something on the ice, picked it up and turned it in, then went on to do his spectacular free skate. All in a day’s work!

So there, Chan doubters. Tech mark 10 pts above comp. And his tech mark 104.31 just fractions behind Jin.

Great performance from Patrick Chan today. Claims his 2nd GP title of the season and is on his way to Marseille. pic.twitter.com/JefXQrnXVO

3 quads and two axels erase a 12 point deficit and win you second Grand Prix of the season. We

Chinese fans’ Cup of China forum discussion on Baidu (Chinese): (Link). Many were hoping for Boyang Jin to have a chance to go to the Grand Prix Final, but were impressed with the beauty of Patrick’s skating. Spectators who were on-site said Patrick’s skating was very worth it and he took them into his world.

As for the wonderful music composed by Eric Radford, he hopes to release it for purchase by Worlds next year:

@rit2_mof Hopefully by Worlds I can release it for everybody. Happy you like it!

I’m sure that Marina Zoueva will go home very gratified that her students won both mens’ and ice dance events!

Ha, figure skating anime “Yuri On Ice” was right that Canada won at Cup of China this year!

Other Videos and GIFs

Livestream replay of skaters arriving at the banquet. Han Yan made faces at the camera, but Patrick didn’t say hello to the cameras when he arrived, presumably because they made the mistake of hailing him in Mandarin instead of English: (Video Page Link). Hat tip to Saba for the link!

Patrick playing catch with his coach, Marina Zoueva while carefully balancing on one leg. It’s all good fun!

Pchiddy yawning – normally I would be in bed right now!

Photos from Day 3 and Day 4

Lucky fans like Mora, who met Patrick in person:

Really really happy.This is the moment that I’ve expected for more than 5 years!!!

A photo posted by

Cup of China Closing Banquet! Feels like yesterday I just got here in Beijing… Anyways, thank you for having me! Not only did I have a wonderful time here, but I have had the opportunity to meet so many inspiring people! 🏆🇨🇳💐 #FanGirling

See more photos of the banquet at VK here, here, and here. Hat tip to @Calica for these links!

See additional photos at Sina here. Thank you to Krunchii for this link and a brief translated summary!

Free skate and victory ceremony. Thanks to @mkr_en for the onsite photos!

Patrick Chan was one of 4 Canadians to medal at the Cup of China https://t.co/OriK6qwhpN pic.twitter.com/E3S6HBX1WQ

Told @pchan31 how much I loved his programs (and the Maroon 5 ex)this season. And his skating is just…incredible. #coc16

This would make a nice album cover for “A Journey”:

So gratifying to see the appreciation for Patrick’s skating out there!

wanted to write about politics, but instead have another hot figure skater: Patrick Chan. Beautiful performance https://t.co/j9wlgWvJKp

Changing gears a lot, Patrick Chan is so stunning in his long program. I love figure skating but he stands out as one of the best ever.

@Rad85E @Pchiddy It was worth it… this program is so beautiful, the music and Patrick's skating are magical! 🙂

Geeking out on video of @pchiddy ‘s free skate at Cup of China. Loving the music and the program. https://t.co/XfbeDpQWGM

@Pchiddy Spectacular Performance at Cup of China! Love your free skate program! Could watch it all day!

Gold at Skate Canada and gold at Cup of China! Congratulations, @Pchiddy! Thank you for your hard work. You’ve made us very proud. https://t.co/jKF3DsjdGs

When technical elements and and flawless skating skills come together, @pchiddy rises to the top. #gpfigure https://t.co/uvNLEr1s0r

@Pchiddy I really like your long program this season. So beautiful. Congregation for winning the gold medal at 2016 Cup of China !! pic.twitter.com/mvGtmdDylb

” /> So proud of you!!! It’s happiness to see you in such mood after programms! Thank you for such unreal FP!!! #CoC16 pic.twitter.com/xUYgjdu6ed

@Rad85E @Pchiddy -You guys just give me chills, you created a masterpiece with your ‘journey’..

@rockerskating -Oh @pchiddy this program is just magical, you deserve to win and I can’t wait to see it again

When @pchiddy is on ice, i forget how to breath

Praise be, #CupOfChina judges see value to artistry after all. @Pchiddy rewarded for technically demanding and simply beautiful FS.

What can I say about @Pchiddy ? Yesterday he broke your heart, today he makes you love him even more #COC16 #GPFigure

Words can’t describe how I feel about @Pchiddy he brings out my feels! Especially with the amazing @Rad85E‘s music! #AJourney #CoC16

Just love this program. The music & choreo make it such a beautiful program. Props to @Pchiddy who skates it well & @Rad85E, the composer.

Just this: @Pchiddy, thank you very much for this beauty of a free skate. #CoC16

Patrick was landing all his big jumps in practice, so he just needed to do the same in competition (which he did except for the quad salchow):

Patrick was in third place going into the free skate at 8:11 p.m. local time (schedule)

For more information on the event, visit the Cup of China English site or Chinese language site, or their Weibo page.

What is your favorite part of Patrick’s performances? Leave a comment below!