It is hard to believe that the 2016-2017 season which started in Finland for Patrick will now come to a close in the same country. Our Blackbird has had a tumultuous journey to date, trying to scale heights he had never tried before. From sublime programs to disastrous jump attempts, he’s done it all and yet still managed to place in the top five in each of his competitive events this season. Now, with the competitive terrain becoming so much more difficult, I have faith that he can yet “take these broken wings and learn to fly”!

For more information on the competition, visit the official World Championships site OR download the Helsinki 2017 phone app!

In a March 21 interview, Patrick said he changed the order of his elements so he could be more consistent under pressure.

The change was more to allow myself a new approach and the possibility of having the jumps become more successful under pressure in competition.

He continues to see a sports psychologist and said it has been helpful in dealing with feelings of frustration from being behind:


We have those conversations where, OK, yes, it does get so frustrating because I am running as fast as I can but they are creeping away from me. It does not help seeing other people have success — being in the spot that I used to be in.

Read Beverley Smith’s article on Patrick and his increased confidence going into Worlds this year.

My Take:
As I said on Twitter and on Golden Skate, is Patrick Chan (the skater) still Patrick Chan without his top-notch transitions and skating skills, sacrificed in the name of more quads? I think Patrick’s interview responses indicate that he still struggles with his purpose for coming back to competition. In my very humble opinion as a fan, he needs to know in his heart/gut with complete conviction and confidence his purpose for skating, and then let this purpose guide his decisions and goals. Without a strong purpose, he will be more likely to follow the trend rather than focus on what he can contribute to the sport (something he’s said that he wanted to do). But if he does his very best and skates his heart out every time, he will affect his audiences in the best way and will win, even if he doesn’t get on the podium! So I say that he should skate according to who he is, his strengths, and his purpose.

The men will begin practicing on Monday, March 27. See the full colored time schedule here and the music rotation schedule here. Patrick is in Practice Group 3.

For those of you watching the event live, the men’s short program event will begin on Thursday, March 30 at 12:10 PM local time, according to the competition timetable. Here are the global time zones: 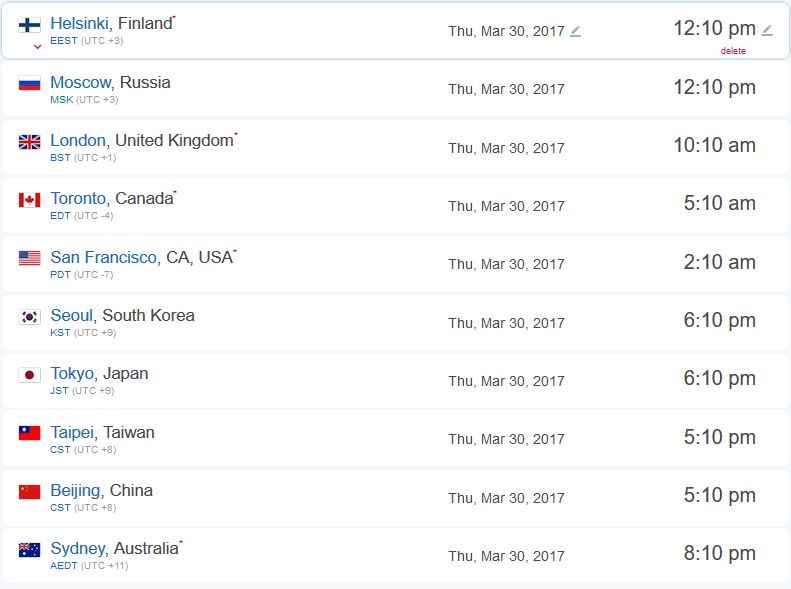 The Men’s free skate will begin on Saturday, April 1 at 10:50 AM local time. The Exhibition Gala will be on Sunday at 14:00 PM local time.

For more information on the event, visit the official World Championships site.

Located on the southern coast of Finland on the Gulf of Finland, the name “Helsinki” is derived from ancient names of the Vantaa River. Helsinki has a population of more than 629,000 people and is known for its beautiful Art Nouveau architecture. Read more about the city here or see the official tourism site here. Helsinki is 7 hours ahead of Canton, Michigan.

The ISU World Figure Skating Championships is an annual competition sponsored by the International Skating Union to award skaters the highest competitive achievement in figure skating (besides the Olympics). The annual event began in 1896, with Gilbert Fuchs winning the first gold at the men’s competition hosted in Saint Petersburg, Russia.

For a list of all world champions in the men’s event, see this page. So far in the history of the championship, the United States has won the most men’s titles (23), followed by Austria (22), then by Sweden (15). Canada has won 14 gold medals, France has three, Japan has two, and Spain has two.

Patrick competed and won this event three times in 2011, 2012 and 2013. Last year, he went from third place after the short program to fifth place after his free skate.

The preparations have begun at Hartwall Arena! We can't wait to welcome everyone for Worlds 2017! #helsinki2017 pic.twitter.com/V33h9TmZsZ

This year’s competition will be held at the Hartwall Arena from March 29-April 2, 2017. See the detailed practice and competition schedule and the official announcement and information package.

Tickets can be purchased here.

Other Fun Facts
Here is the official World Championships song!

The official song of the Helsinki Worlds! Learn the right moves by watching the video.Opening Show on Wed 29th. #helsinki2017 #worldfigure pic.twitter.com/K7zTIXEcET

Canadian Team
Besides his coaches and Skate Canada’s High Performance Director, Mike Slipchuk, Patrick will be in Finland along with 15 other Canadian skaters (link). His Canton training mates the Shibutanis will also be at this event.

The Men
Patrick will compete against the other men on this list. Following are the top-ranked skaters according to ISU’s World Standings (Patrick currently ranks #4):

Last year in Boston, Patrick ended up in fifth place after having to perform on bad ice. This year’s World Championships promises to be a continuation of the quad showdown from Four Continents, with Javier Fernandez added to the mix. So it’s Javier vs. Patrick vs. Yuzuru vs. Shoma vs. Boyang vs. Nathan. May the ice stay solid!

No doubt Patrick will go all out for his final competition this season, an intense event for all the men competing and pushing their technical boundaries. May joy, peace, and a sense of purpose lift him up as he takes the ice and shows us the great artist that he is. Soar high to the skies, Blackbird! Soar!

The Patrick Chan #helsinki2017 Countdown: Just ONE more day until he skates his SP! See my #WorldFigure post at https://t.co/QPA1XQQkYo ! pic.twitter.com/GfgoCuj3Kd

The Patrick Chan Countdown to #WorldFigure: Just 7 more days until we get to see @Pchiddy do this at #helsinki2017! #GoPchiddy! 👍 pic.twitter.com/QwXYM5I1QT