What a way to end a great Stars On Ice week – on Mother’s Day! Patrick introduced the video for the group:

Love the snow that skaters make when they land jumps. Same cluster of fans on this side so lucky to receive TLC😜 @Pchiddy @starsonice #SOI17 pic.twitter.com/uW3FC5sBxD

Oh, how I wish I was sitting on the side that received his down-on-one-knee swivels. 😥 @Pchiddy @RogersPlace #SOI17 #yeg pic.twitter.com/I0JyeNaq8f

Hm. I find the combo of @Pchiddy and @kaetlyn_23 so soothing to watch. Ice dance number next yr? @starsonice @RogersPlace pic.twitter.com/4xdvL04IyW

The level of #sportsmanship, #grace, #agility, and #dedication at @StarsOnIce is unparalleled! Thanks for an #amazing show! #SOI17 #calgary pic.twitter.com/U5TBgBC7v8

Thx @starsonice for the chance to meet @Pchiddy & @J_Butt . They were so sweet when I asked them to take a pic with the cowls I made. 😆😸✌ pic.twitter.com/stMIS4MNHt

Our Ice Palace skaters got to hang out with the Stars On Ice Cast before the show. #dreamcometrue #sogreat 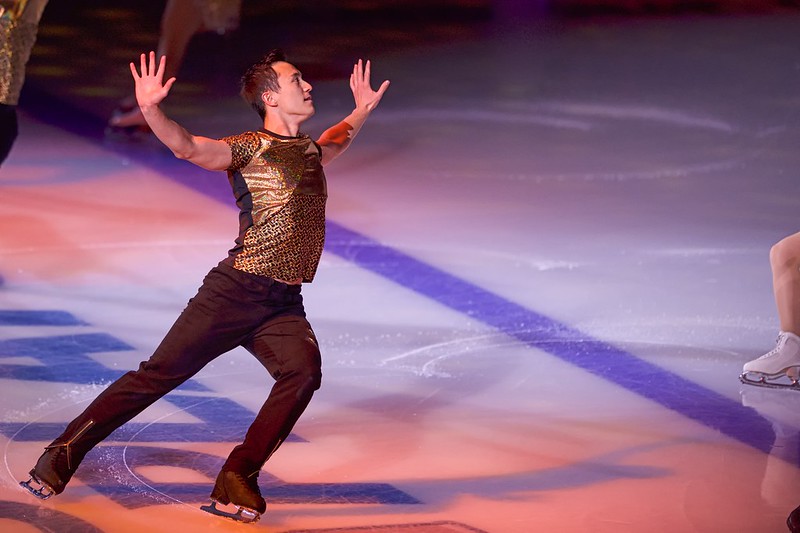 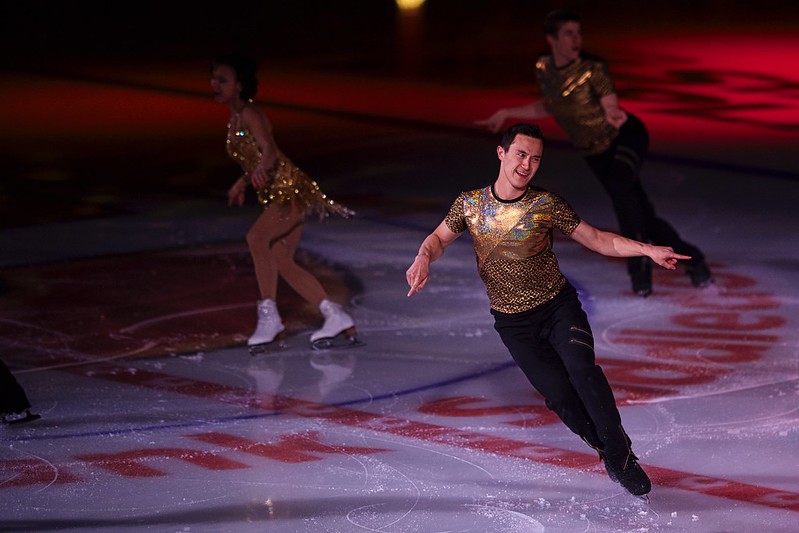 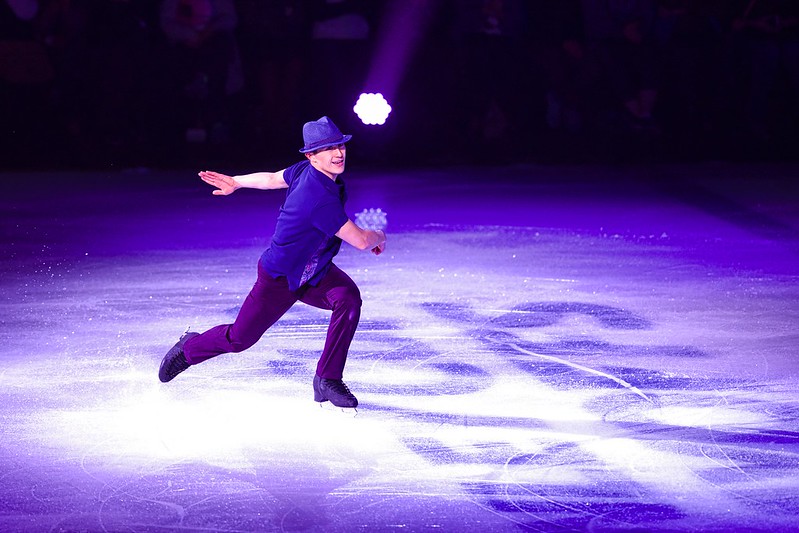 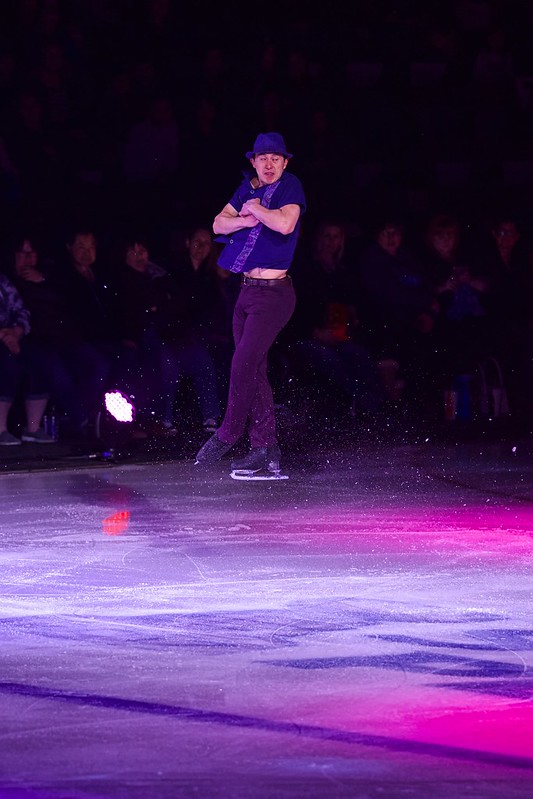 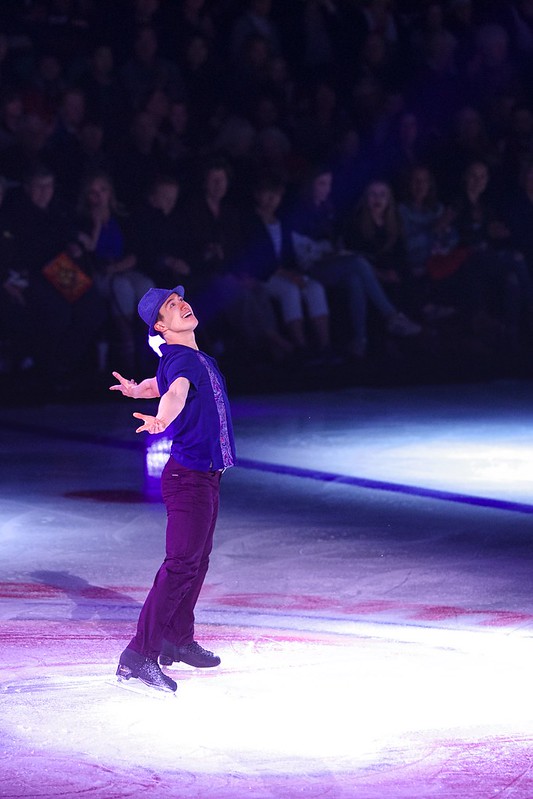 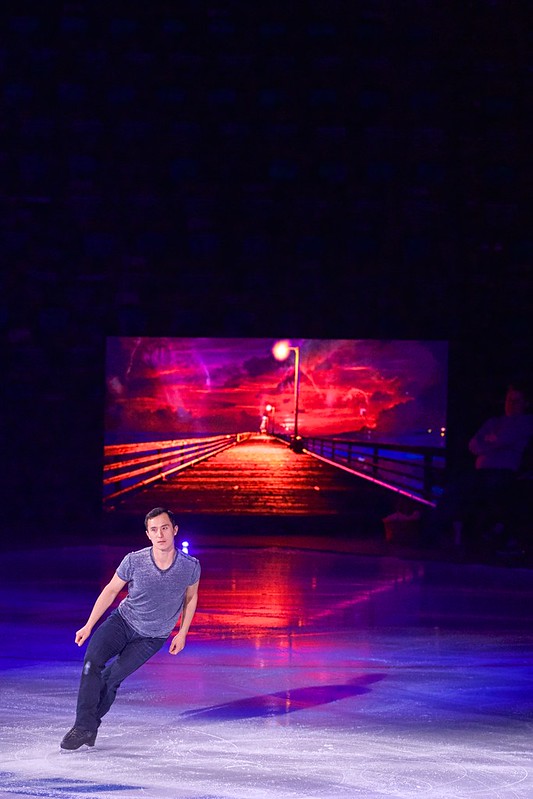 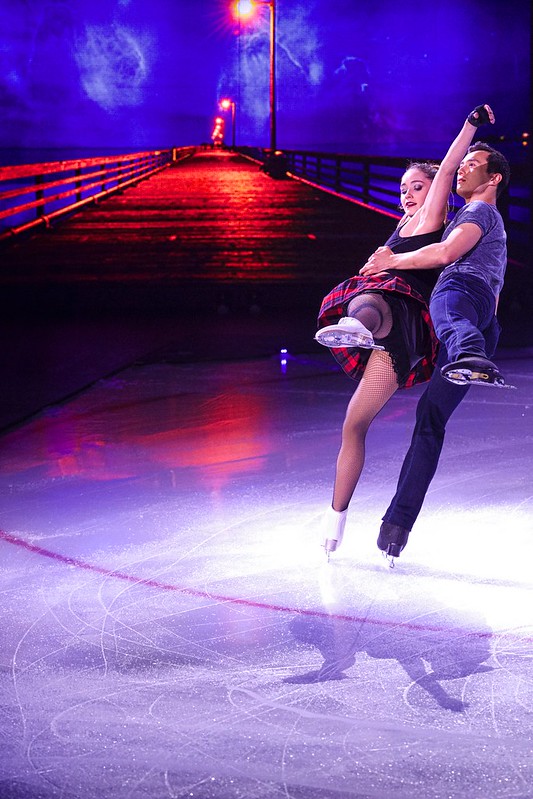 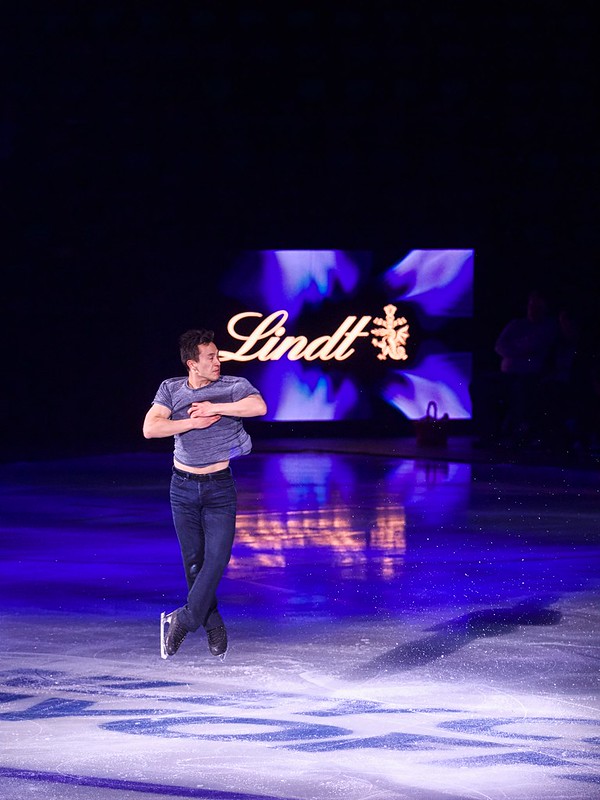 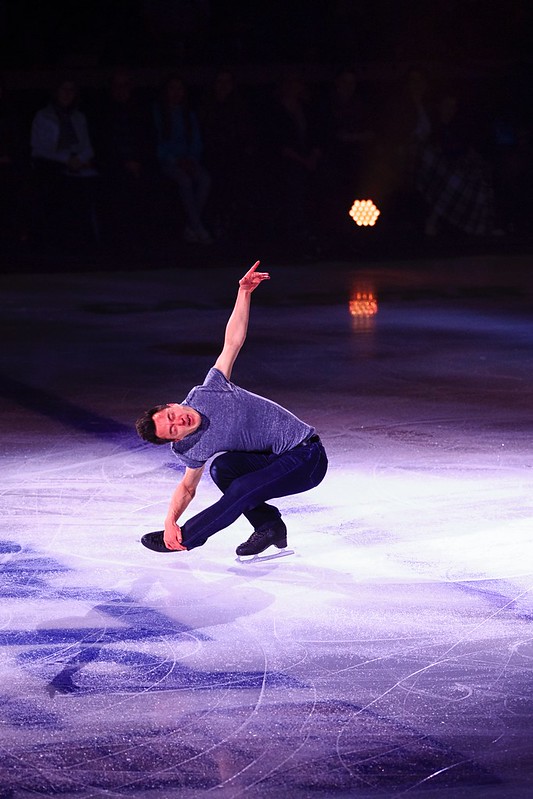 It's a #StarsOnIce Mother's Day Matinee today in #Calgary at Scotiabank Saddledome! pic.twitter.com/juJ0lqvAIy

The @starsonice cast may be on the #ice, but they're certainly not #frozen! #SOI17 #athletes #canada pic.twitter.com/jpVU6ocdxB

ICYMI: On Saturday night some of Canada's finest figure skaters took over the ice inside #RogersPlace! Show gallery: https://t.co/r3hCzj6pFm pic.twitter.com/XKE2q5aPNQ

@pchan31 and I getting ready for tonight's show in #Edmonton at the new #rogersplace !! Rink is amazing. And Chiddy and I seem ready for the novice pairs event with our sbs double axel 😜🙈#starsonice @starsonice

Thank you @J_Butt and @Pchiddy for that incredible night! Bucket list item checked with a star! Def coming next year! 🙌🏽❤️😍 pic.twitter.com/Fk3noYzLOD

Another amazing @starsonice show! Thank you skaters for sharing your passion, talent and love for skating with #yqr! #starsonice pic.twitter.com/ofgvgQbyGM

Another incredible show, another amazing evening. Thank you so much @starsonice! #skaters #SOI17 pic.twitter.com/j2fx01zsVB

And that’s a wrap! The #SOI17 cast concludes the #Edmonton show in #style! Catch them next week in #Victoria & #Vancouver! @starsonice pic.twitter.com/QuTHnp7E7I

#SOI17 sorry the pics aren't the greatest I was busy trying to watch mainly but it was awesome! pic.twitter.com/a99luSFr3V

What a cute interview and skating lesson with Patrick! Click on the video link in the tweet below. I will post a transcript of the interview soon!

Alex: Have you been here before?

Patrick: Yes, I have. I think three years ago with Stars On Ice.

Alex: Awesome! Okay, well, let’s talk about you a little bit, because obviously you are best known for figure skating, but when you were a kid, you had your hands in all types of different sports…

Patrick: Yeah, my mom put me in… my mom and dad put me in all sports, like tennis, swimming, golf, skiing is actually my first sport before skating, so… Skating was just a part of like, my extracurricular activities. It wasn’t anything serious at first.

Alex: What’s kind of kept you in the sport? What’s drawn you and kept you here?

Patrick: Uh… well, I was good at it (laughs). That was the first thing. I figured out I was kind of good at it, and… honestly, I love that I have full control of my own… results. I can control whether I can be on the podium or not. I have complete control over it, and… it’s a very nervewracking feeling to be on the ice by yourself but it also can be the most blissful feeling ever, and… it’s, I think you’re playing with fire. That’s why I like figure skating just because it’s a risk. It’s a risky sport.

Alex: Definitely. Okay, let’s talk a little bit about Stars On Ice. How did you get involved?

Patrick: Well, I started, I believe in 2012 or 2013 and… been doing it every year since. It’s basically a family. We become… you know, obviously the tour is not as big as it used to be, when Kurt and Brian Orser were doing it, but it’s still the quality and… now we have Jeffrey Buttle doing, being creative director and choreographer… It’s, this year’s show is completely different. It’s a lot of energy… brings a lot of energy into the audience and hopefully draws them in, ’cause that’s how we love performing when the audience gets involved.

Alex: Definitely, and the show is in Regina tonight, here at the Brandt Centre, 7:30. Tickets are still available. Why should people come on out?

Patrick: Because it’s great! Figure skating is awesome… we have a lot of blasts, there’s great songs that are being played. Each number is entertaining. Elvis Stojko, Kurt Browning, myself, Jeffrey Buttle, Meagan and Eric, Kaitlyn Osmond… we have great quality skaters and… we just love to show you guys what we can do.

Alex: All right, well, we got to send it back to studio for now. We’re going to be skating with Patrick coming up next. Can you send us off?

Patrick: I sure can, I guess. (laughs)

Patrick does his signature final spin.

Interview: PART II
Alex: That’s right. I’m back out on the ice with Patrick, and we’re going to do a little bit of skating. I’m a little bit hopeless in the skating department, but maybe you can whip me into Olympic shape. Where do we start?

Patrick: (laughs) Am I asking too much?

Alex: You’re like a swan. (she struggles on one foot)

Patrick: That was kind of like a swan, too.

Alex: It’s kind of like the awkward duckling swan version.

Patrick: Yeah, there you go. And then… we’re going to do…

Patrick: Slalom or skier, I guess. So you… like you’re going around the gates.

Patrick: Yeah. Backwards? We can do it backwards.

Patrick: Okay, we can do…

Alex: No, I can do it! I’m skiing… (she stumbles; Patrick gasps and holds out his hands in case she falls)

Patrick: Okay, no, that’s not… omigod…

Alex: I’m doing it! No! I want to be like Patrick Chan!

(But Alex seems to get the hang of it.)

Alex: Yay! Okay, what about like a quick… one-two…

Patrick: Yeah, you could do a two-foot spin. Yeah… (he demonstrates) You jump the other way, then. ‘Cause you…

Patrick: Yeah… (does another spin, and then some elliptical spinning)

Patrick: We’re going to try to do it…

Alex: I have to ask you… Tonight, full stack show… Of course, Elvis was in the news…

Alex: But he’s going to be here in Regina.

Patrick: He is. He already performed in Winnipeg, so he’s already got one show under his belt, and yeah, he’s doing great. The rest of the cast is healthy and… we’re excited for the show.

Alex: How do you guys prepare for a show? Like this, do you have a pump up song or…?

Patrick: We usually… actually, a tradition that we do, with at least Jeffrey Buttle and I… we usually run the stairs of the stadium, just to… like, as a warm up… to try and get us going.

(Patrick and Alex skate backwards, but Alex can’t maintain it. Patrick flaps his arms like a bird.)

Thanks so much to Patrick Chan for the skating lesson! Watch for us in the Olympic Pairs category! ⛸😂 @pchan31 @starsonice @ctvregina

Interview with the Calgary Herald

It’s official! Patrick will work on adding another quad to his repertoire this summer.

I’m going to do my part to stay current and stay competitive, and the way I can do that with the current state in the sport (is add another quad), it’s all I can do.

Regina, you're up! Use #StarsOnIce and tag @starsonice to show us your experience at tonight's show!

can u believe Patrick Chan and Kaetlyn Osmond danced together and to City of Stars 😍😍😍#StarsOnIce pic.twitter.com/6kd6MM4ybT

Such a fun time at #StarsonIce with the #famjam

Check out the #smiles on our #Winnipeg meet and greet #winners’ faces! @starsonice is at @RogersArena tonight, #Vancouver! See you soon! pic.twitter.com/fc46jYzzX4

Great performance Patrick; being all confident and stylish. I want to be like you when I grow up! #winnipeg #Mike4MMVA #starsonice pic.twitter.com/eyrNi2blZo

How amazing was the @starsonice performance last night?! All the skaters put on such a show! #mtscentre #winnipeg 📸:@DanHarperPhoto pic.twitter.com/AyG6ivALjB

That's a wrap @mtscentre! Thanks for a great night Winnipeg, it was fun! #StarsOnIce pic.twitter.com/zF96fmqN7e

Oh how I love figure skating! Artistry meets athleticism on ice! @starsonice never disappoints. Thanks Sherry for the fun,friendship&night out! Till next year…🇨🇦⛸🇨🇦⛸🇨🇦⛸🇨🇦⛸🇨🇦⛸🇨🇦⛸ #starsonice #SOI #winnipeg #lindt #figureskating

GIVEAEAY STARS ON ICE TICKETS!! If you would like to win these 2 tickets, post your favorite skating photo with #ipfsc (photo can be of yourself or any skater you admire). **Must be an Ice Palace GDP current skater to enter. Draw will be Thursday morning. #starsonice #giveaway

Winnipeg, see you in a few hours!

Tell us what you're most excited for about for tonight's #StarsOnIce show! pic.twitter.com/5azQx91pEJ

Patrick was featured at the top of this poster!