**NEW: Transcript (below) of David Wilson’s comments about Patrick in his new interview with TSL!** At last our blackbird will travel to Marseille for the ISU Grand Prix Final (GPF)! The mens’ competition will be intense, pitting established champions against the aggressive younger generation. Here were Patrick’s thoughts about the upcoming events:

@Pchiddy feeling calm, cool and ready to compete next week @GPFigure. "My biggest challenge will be to keep my nerves under control."

At this point in his career he wants to be concerned only with his own challenges and goals. The minute he gets concerned with winning, that means lots of quads, and that means setting himself up for trouble.
Read more about his comments here and here!

TSL and David were discussing Patrick and Javier Fernández’s programs:

DW: And with Patrick, you know, that’s a whole different story. I mean, it’s just such a completely different piece. I’m really happy that he seems to be doing well with that, and it makes my life easier when they get to the point where they’re facing each other. Because… how do you, if you’re someone that has several children, you don’t love one child more than the next, I would imagine. I don’t have kids, but, you know what I’m saying?

TSL: Depending on the day of the week, yes. (laughs)

DW: I mean, they’re such entirely different type people, and entirely different type of skaters… I mean, I’ve said this a thousand times before. I think both of their programs really seem to fit them well… When they end up facing each other, then I can feel… I mean, it really is comparing apples to oranges, so it’s whoever skates their best is going to be rewarded, I think. You know what I mean? Because how can you say that one is better than the other, really? I mean, really, you can’t. You know, I can’t. So… I hate competition, anyways. I really do. (laughs)

TSL: (laughs) It keeps you in business, but yes…

DW: It’s a necessary evil, but I hate it. I wish we could all just be one big happy family and do shows all the time. (laughs)

DW: Put it on tour… throughout the world.

TSL: Well, how are you feeling with how Patrick is doing? Because last year obviously, his comeback… Patrick Chan can bring some tension and drama to our lives, because he can have… last year, the short program he had struggles, and then, [in] the free program he would come back. This year, he seems to be more even-keeled, having a year under his belt. What kind of a difference do you see in his skating from last year to this year?

DW: Well, it’s exciting to watch him step it up a notch… I think it’s very admirable, because you know that saying… I shouldn’t say this, because he’s nowhere near being old. He’s only 25 years old, he’s a baby. But… you know… that saying, “it’s hard to teach an old dog new tricks,” and that kind of stuff, and… I mean, he’s not old by any means at all. But it’s I think very admirable to watch Patrick add in this new quad salchow. Last year, he upped the ante in adding the two axels as well as the… and it’s hard. I mean, the older you get and the further down your road to success, it gets harder and harder and harder. These young boys, they come along and… they don’t have that risk factor built in yet, because they’re still challenging. When you get at the top for a long time, you’re defending. I mean, it gets harder… so I’m really proud of him and I’m really… I think it’s very admirable to see him… step it up and go for it.

I just said to him, “keep challenging yourself, and it’s so fun to watch you go for it.” Because I haven’t seen him do the quad sal, but apparently it’s gorgeous and he does it often in the practices now and… people are seeing it at the competitions, and… There’s twice now he’s tried it and gone down, but, but still held the rest of the program together, which is nice. Everything else didn’t fall apart. I mean, I know that last year was a bit of a struggle… it was kind of maybe a bit of a shock coming back into things. But he seems to be… facing this new reality well, so…

TSL: I wanted to ask because he was against Boyang Jin at this competition. He obviously beat Boyang Jin and it really came down to the components, where he’s at such an advantage. I wanted to ask you, as a choreographer, how big of a difference is it when they go from two quads to three quads to four, in terms of what they can do, what they’re stamina is, and how many steps and transitions you can really put [in] the program. Because we’re seeing some programs that are very generic, where they do four or five quads, and then some that still resemble programs that you remember. So as a choreographer, how do you handle that?

DW: (sighs) Well… so much of what we can do depends on the skater and what they are comfortable with. I think it’s our job as choreographers to try to weave together the technical elements and give meaning to the way they’re woven together, so there’s a connectivity with the music. And even if it is simple, things can be simple and still engaging, and still… and purposeful. So it’s really hard to say and generalize. Some skaters are more comfortable than others doing da-da-da-da-da-da-da, and jump. Whereas others need a more sedate and controlled, contemplative setup, and then jump. But you can still somehow use to your advantage both things if you’re smart and sensitive to the music. So it really depends.

You know, this whole idea of transitions and transitions… There’s nothing I hate more than arbitrary arm movements… and arbitrary turns just as much, because it just looks like a cluttered room as opposed to something that is well thought-out and designed with a vision and a sense of purpose. So I hate the tendency that… this new system was created to try and quantify something that’s really almost unquantifiable. So I think we need to… keep things from going too overboard. This notion of… going for that extra point if I add a little choctaw here, then I’m going to get… Let’s skate to the music as we always have tried to, and let’s try to… keep skating fabulous and beautiful, and let’s not go overboard. I mean, I just…. (sigh)

TSL: Will the total package win out, do you believe, at the end of the season?

DW: Oh, yes, always. Always, always, always, and beautiful skating will always win, always win. But… I shouldn’t say that, because… if somebody with… the highest quality skaters really have an off day, and a younger, up-and-coming, maybe somewhat less mature, but technically incredible skater comes along and nails it, of course they’re going to win. I think, long run and long term… and you know what, these young guys, it’s amazing to watch them… It’s always been like that, there’s always younger skaters coming up, kind of pushing the envelope, and then there’s more mature skaters having that total package. It’s always been that yin and yang and that struggle in our sport, so there’s nothing new.

TSL: But the new thing is that the trump cards are quad lutzes, which carry tariffs that other people can’t compete with at times.

DW: Absolutely… It remains to be seen that with the younger boys putting in these quad lutzes and quad flips because they’re…

They’re young and they’re eager and they’re going to put these… and it’s great, when they do them it’s amazing, but it remains to be seen that that’s what it’s going to take to win at Worlds or win at Olympics. We’ll see. I mean, Yuzu’s adding in his loop. Maybe Javi will have to add in a loop, and…

TSL: I’ve seen the Javi do the loop, and it was pretty spectacular…

DW: He does it every once in awhile for fun! I don’t think he’s ever tried it and missed it, but he doesn’t really work on it. I know Patrick used to do flips, way back when… he hasn’t probably done them in years, but… In much the same way as… there’s the axel-sal-toe family, the loop-flip-lutz family… well, if you can do a double of this family and a double of that, or a triple of this and a triple of that, well then, it’s the same with quads. So you see them doing… they can do a quad toe, they can pretty much do a quad sal, and then vice versa. If you’re used to turning four times, what’s the big deal, right?

For those of you watching the event live, the Mens’ short program event will begin on Thursday, December 8 at 21:10 PM local time, according to the ISU’s competition timetable. Here are the global time zones: 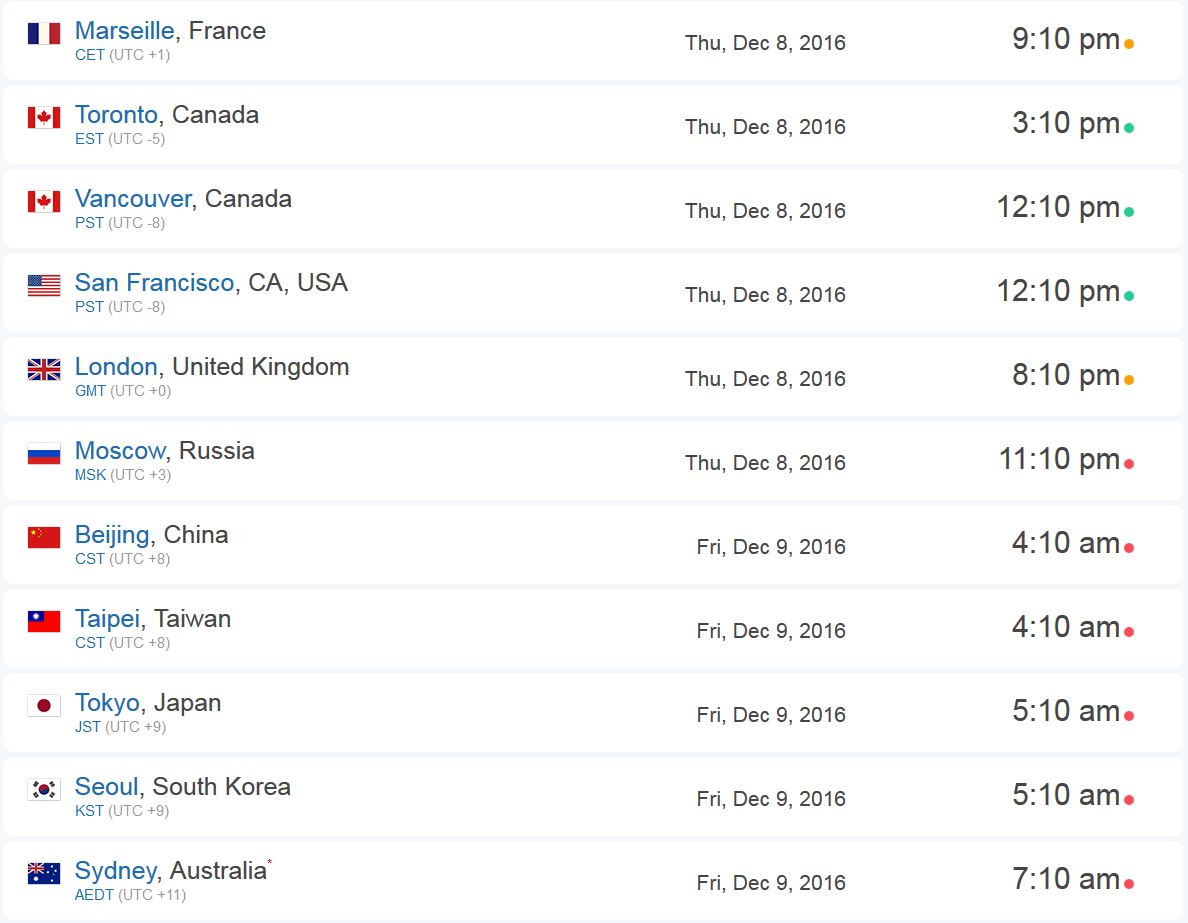 Located on the south coast of France on the Côte d’Azur or French Riviera, Marseille began as a Greek settlement named Massalia around 600 BC. It is the second largest city in France, with a diverse population of immigrants from Europe and Asia. See the official travel guide in English here. With a time zone 6 hours ahead of Canton, Michigan, Patrick will have to get used to getting up much earlier than usual in the morning.

This year’s competition will be held at the Palais Omnisports Marseille Grand Est from December 8-11, 2016. See the detailed practice and competition schedule and the official announcement. Tickets can be purchased here.

🔢 How excited are you for this line up? #Marseille is just two weeks away.

Patrick will compete against the other men on this list. Following are their ISU World Standings:

See more information about the other competitors in the event here.

Good luck to all of the skaters!

I think that being in the French-speaking part of the world again will boost Patrick’s confidence and help him remain calm and focused on the process and not on the results. By this time, I hope he knows that his fans are behind him and he is surrounded by love and grace at every turn. Bonne chance, Patrick!